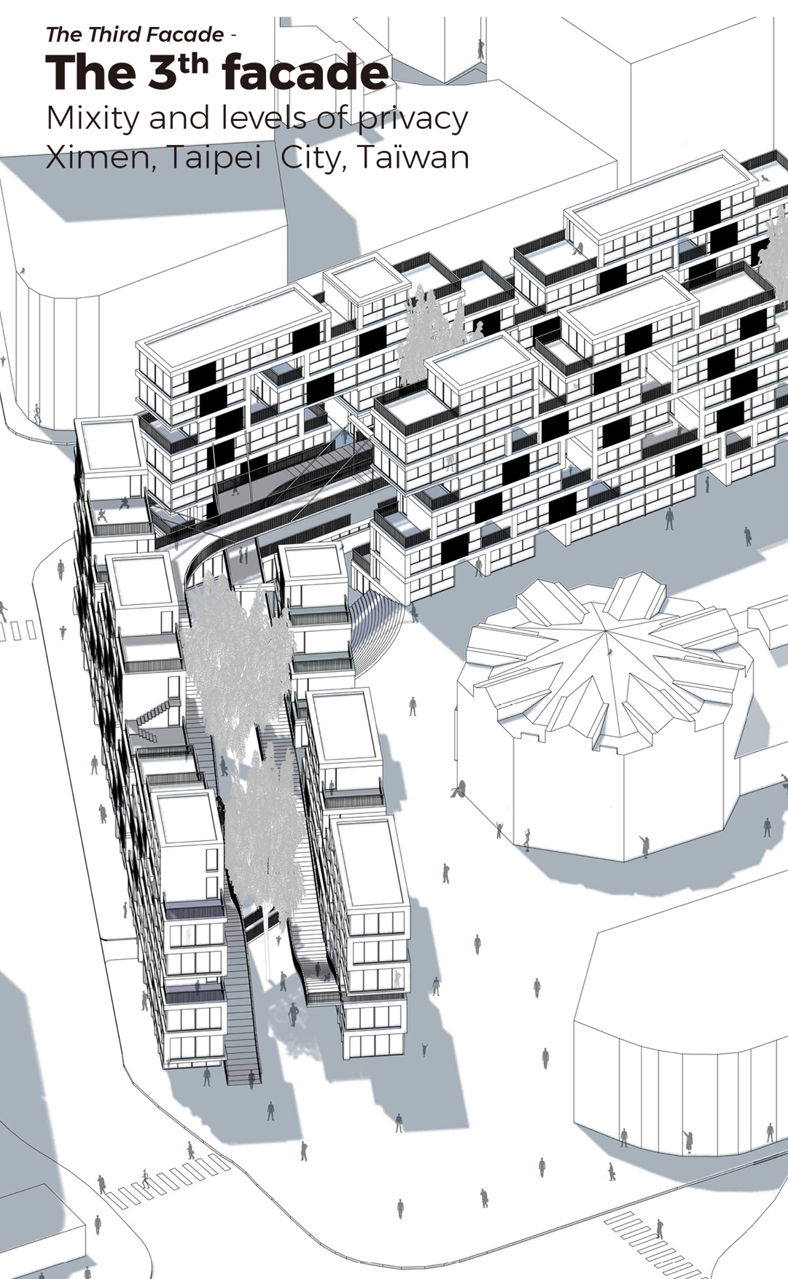 The project is located on the Ximen site, a district well known to deals with several aspects, such as culture, night life, tourism and economy. The actual building on the site is made of an assemblage of shops stacked on two levels, not really connected to each other. Through the years, the building grows without considering the Red House. As a result, the Red House is now in the shadows of the market place.

One of my main goal on this site is to create spaces and situations which will allow the confrontation between the different users of the site. The idea is to bring mixity by adding a third façade in the hearth of the project. This façade will take the form of an elevated urban street, which will connect all of the protagonists of the site. From this skywalk, the habitants should fill all his needs. The shops and services spread all along the inner street will create a city in the city, positioned as a “third place”, offering a new space of living between your house and your work place. This hybrid urban place will encourage people to go out of their homes, creating news opportunity of gatherings.

The new project should showcase the discovery of the Red House from the visitor, especially when they come from the MRT Station just few meters away.

Because it was technically impossible to make the skywalk reaching all the floors, the project chooses to develop the vertical circulation inside the living units. As a result, the living units will develop the principles of a cluster but in a vertical way. Each floor will offer a different level of intimacy.

The general form of the building should reflect the interior organization. The facade is thinking as a « live section », showing on the street a typical slice of a regular building, emphasizing the daily movement inside the apartments. The most intimates spaces hide their privacy under layers of cladding panels and inner circulation, to preserve quality of living inside a very dense area.

By reorganizing the daily commute inside one single edifice, the inhabitants will support the economy of the whole building. As an autonomous house, each population of the project should cover all of his day-needs just by reaching different spots on the elevated skywalk. In the same way, some elements of the program are shared with the citizens to add more value and mixity inside the project. 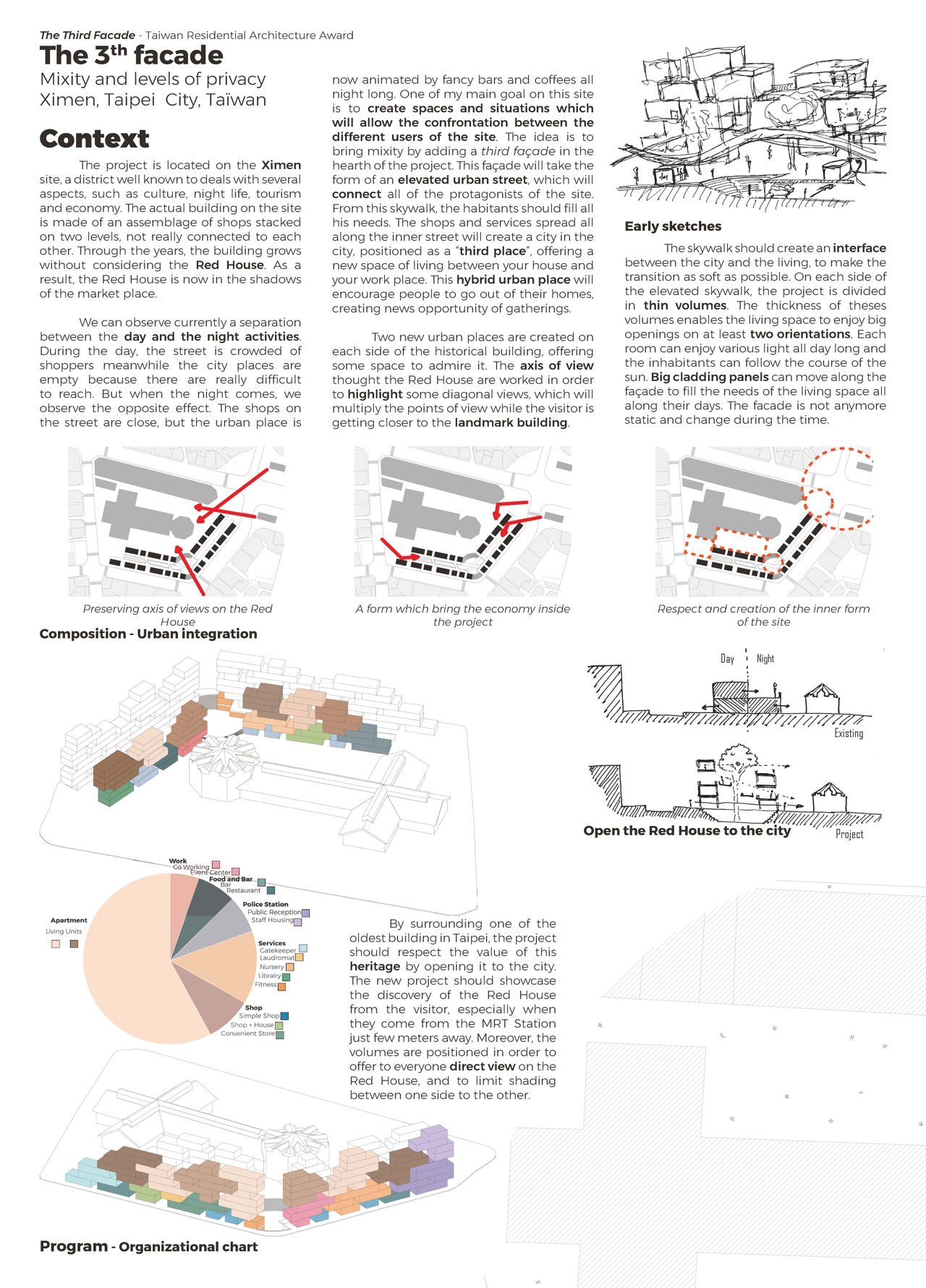 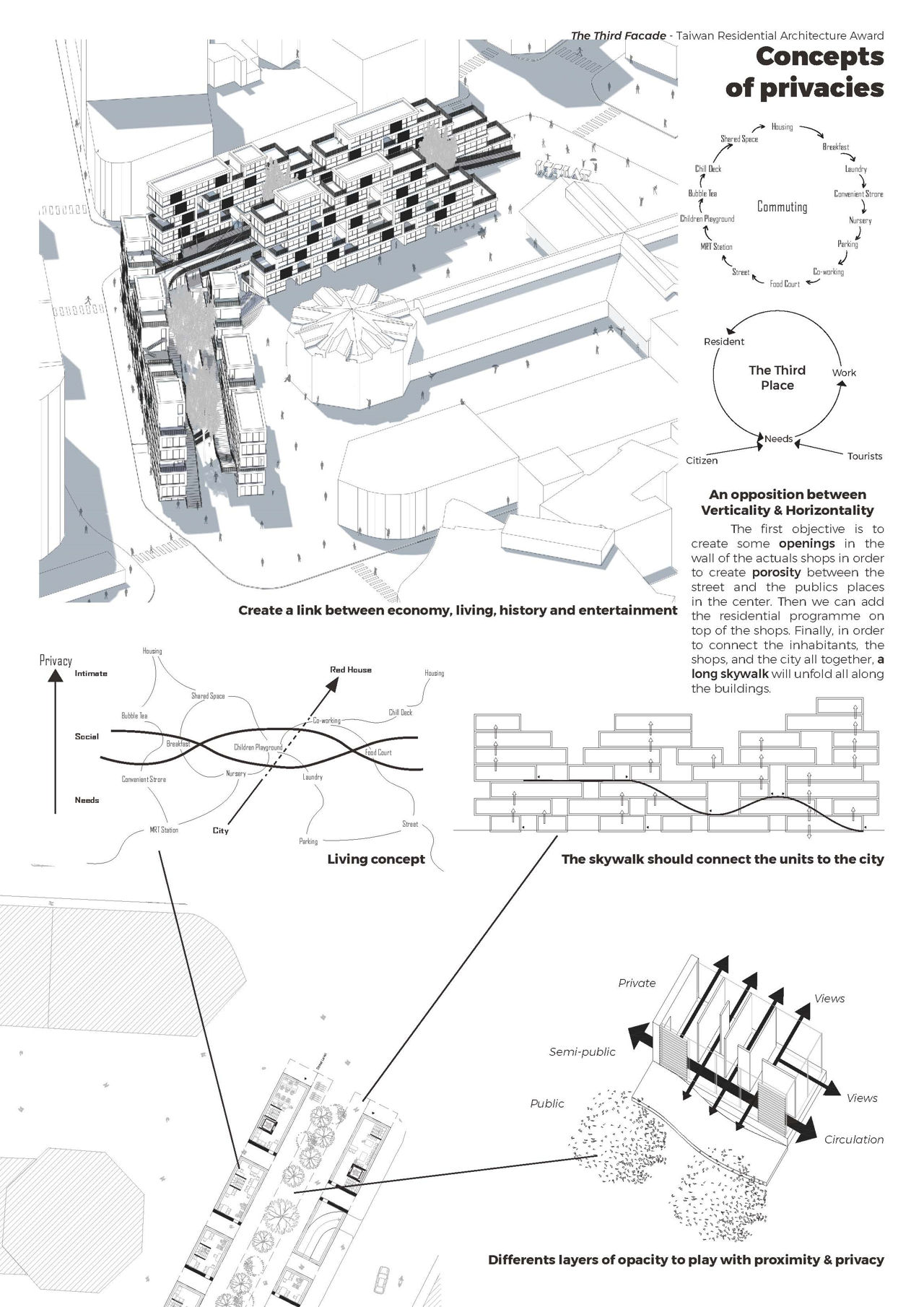 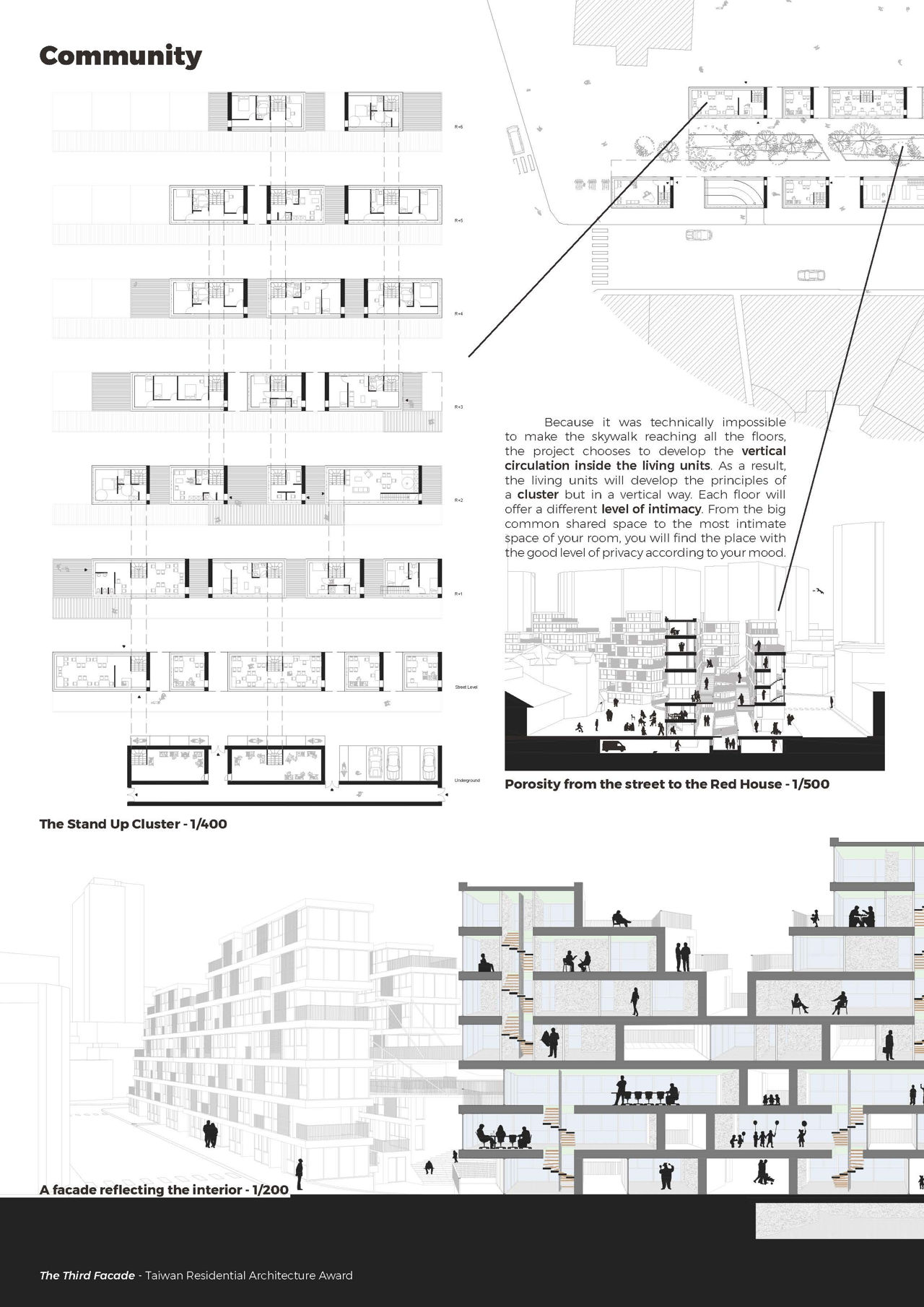 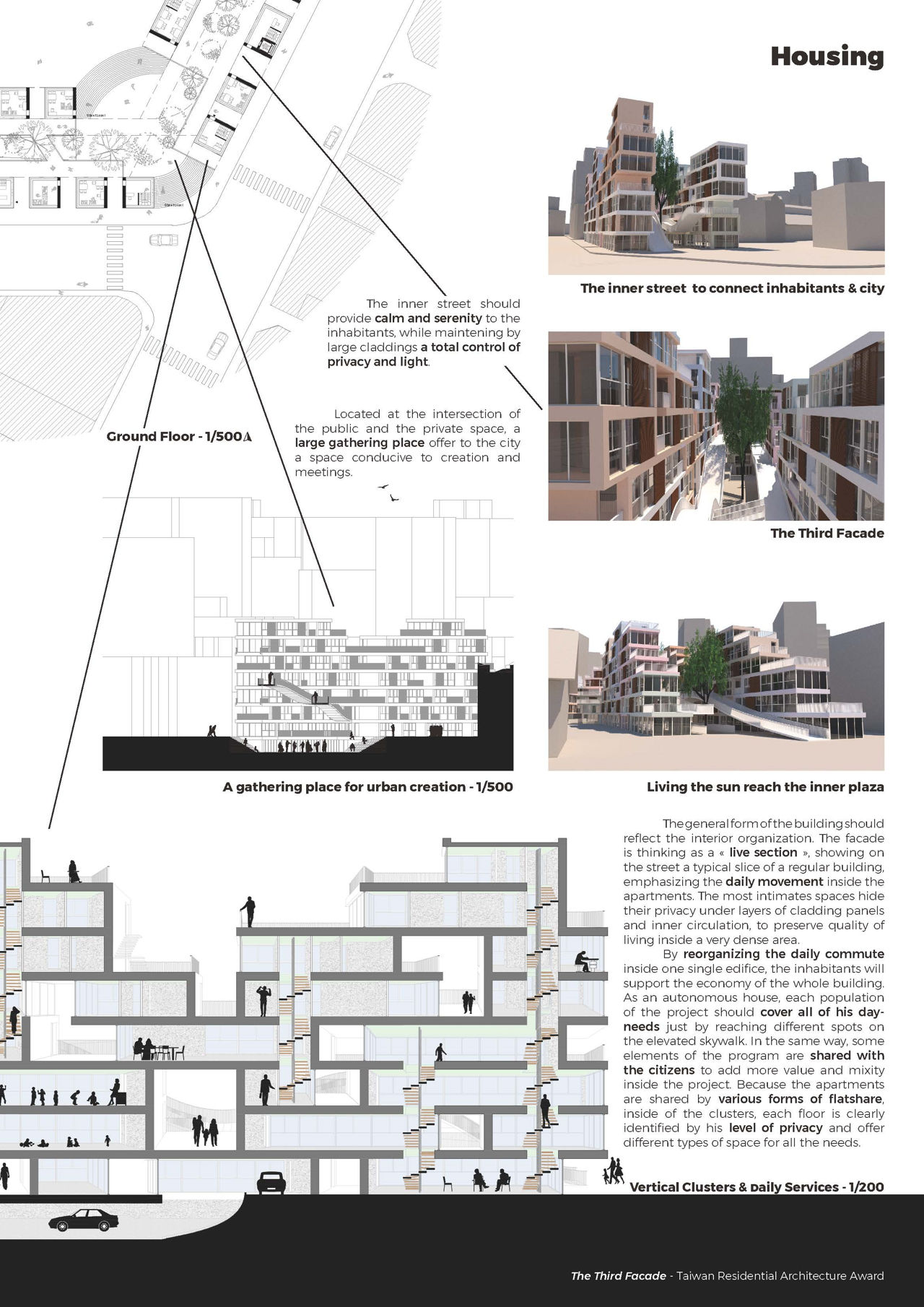