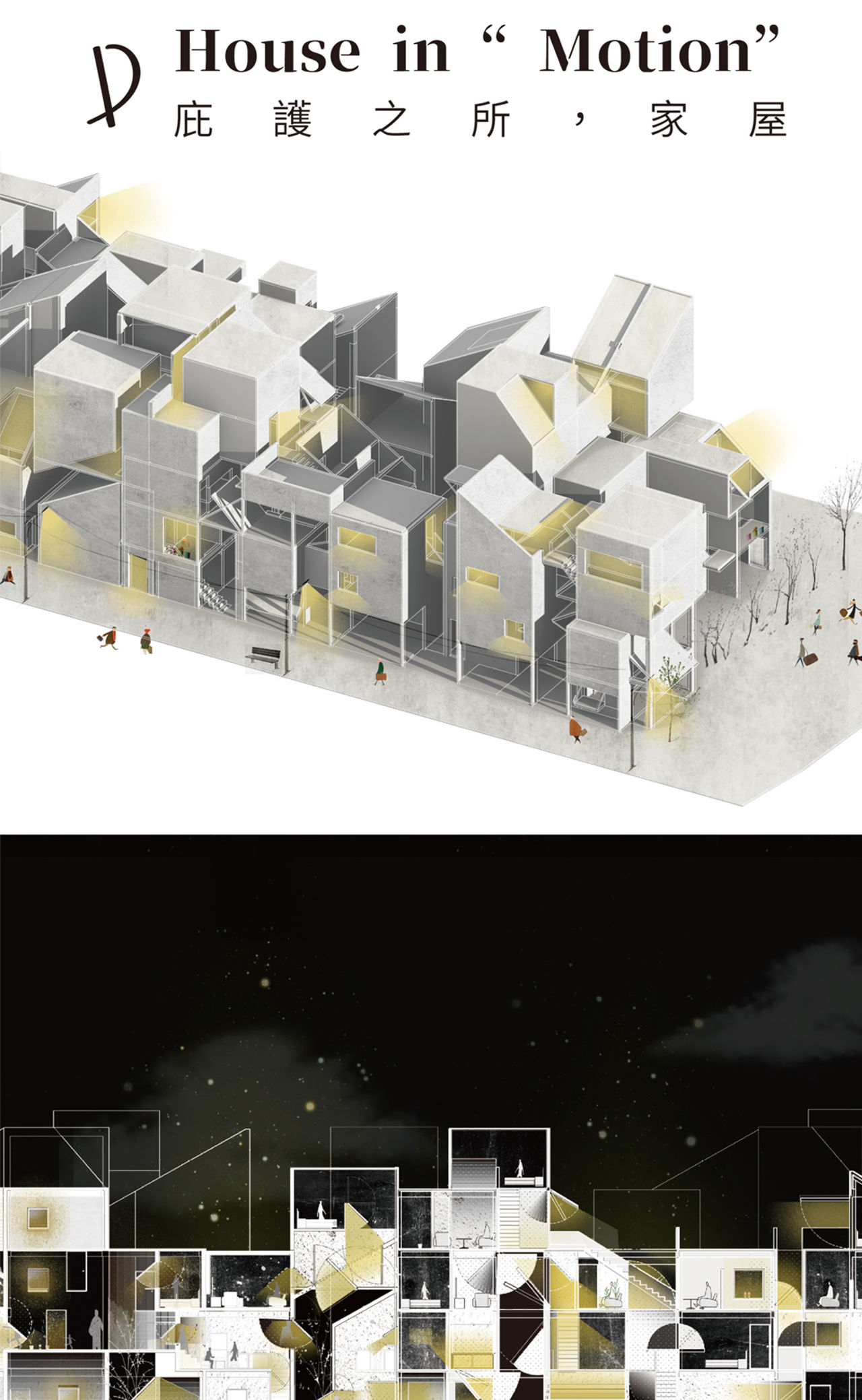 In history, Nangang is an industrial area of Taipei City: a support character full of factories,chimneys, known as "Black Township", labor and life become very close in this area. Apartment is like a "The living factory", a grid of products in the same residential units, as time passed, the retire workers faced the problem of the city, their children left the old community, apartment gradually became empty. The population structure of this region is gradually dominated by senior citizens and retired workers, the non-use rooms have become an economic opportunity.

During the industrial generation, work, family and family members are directly. To support a family's economy, workers (or homeowners) must be busy making money and sacrificing the quality of their lives. After The World II War, poor people have to share the living space and meals with others. This has created a mutually beneficial and mutually beneficial lifestyle.

Nowadays, their have difference in working or population structure. This kind of help is important and precious, the owners of the homes are retired and old, their family organization changes, and one unit nearly 132㎡ may only need 66㎡ of kitchen, bathroom, bedroom, living room, and even share their dining room with another old person. I hope to redefine the functional organization of the home. The empty space has the chance for the young people who get low economic output. There is a shared space between the two units that can form a large one: kindergartens, activity center, health care clinic, etc., and all units are combined into a complete community with: Food, clothing, housing, economy, education, entertainment.

The home help lonely or old people, growing children, efforts to raise their family ...... This is the 21st century definition of "Co-living".

Attached to the space extended by existing buildings, illegal construction, arcades, ceilings, so on. The way in which people change space is action (extend, flip-up, moving……etc.).

Accumulation of actions: Units and units are added to become communities. The other functions in the house, in addition to living space functions.

After the action takes place, people exchange the function: empty and unused space. The spatial prototypes observed from the Nangang map show the spatial use of people's life. Each prototype is equipped with actions, elements, major functions, subordinate functions, and irregular activities. The public and private colors defined in the previous section are used to paint each space, and new textures and overlapped surface by each action.   The various life functions extending from the house can be organized with each other. In the new building, there are scenes that are both public and private, with elements and actions intertwined.

In Nolli Maps, he used Figure Ground for drawing a map of Rome; I wanted to use black positive and white negative for representing residential and public space. The city is divided into positive and negative, with black representing the public and white representing privacy. Residential in Nangang area : It is black on the map. However, when people join the balconies, arcades, rain shields, trails, fences and other space objects or elements, the building space is no longer a solid "volume."

When the fragment of the space object is drawn on the map, it let the "volume" begin void.

These functions hidden under the quantifiers connected the whole Nangang area. Residents learned about how the community was connected. Dotted, linear, and different textures formed on the map of Nangang became a new map index and created the collage Nangang.

This is an independent but group-existing dwelling; we have the most intimate universe: the rooms, the most complete house: the sense of community surrounding. City is composed of many dwellings in this way, the house is the smallest standard of dwellings. It defines the compatibility between public and private through open and close; it also exchanges and owns the community. We open doors and windows to form hidden arcs, the lights also illuminate the community(B).

People's lives blur the boundaries of space, and space changes through motion.

2.The empty units become the economic sources for the house owners.

3.Retain some of the residential functions and put in new ones try to connect the residents with the new residents: kindergartens, clinics, temples, shops, etc.

The project composes by 25 Sharing houses, using the tiny elements of the building - lights / windows / wall changes, such as the butterfly effect to flip the boundaries of the public and private areas.

The elements of the unit can be used as one-person residence, but the second layer is covered by community functions: To maintain the basic needs of the community, and the actions of another user also flip the attributes become the two units share space. Square and lanes protect the residents like barriers are the outermost layer.

The collection of 25 units combinations is based on a vague definition of public and private spheres, which may be the multiple possibilities of 1/25. 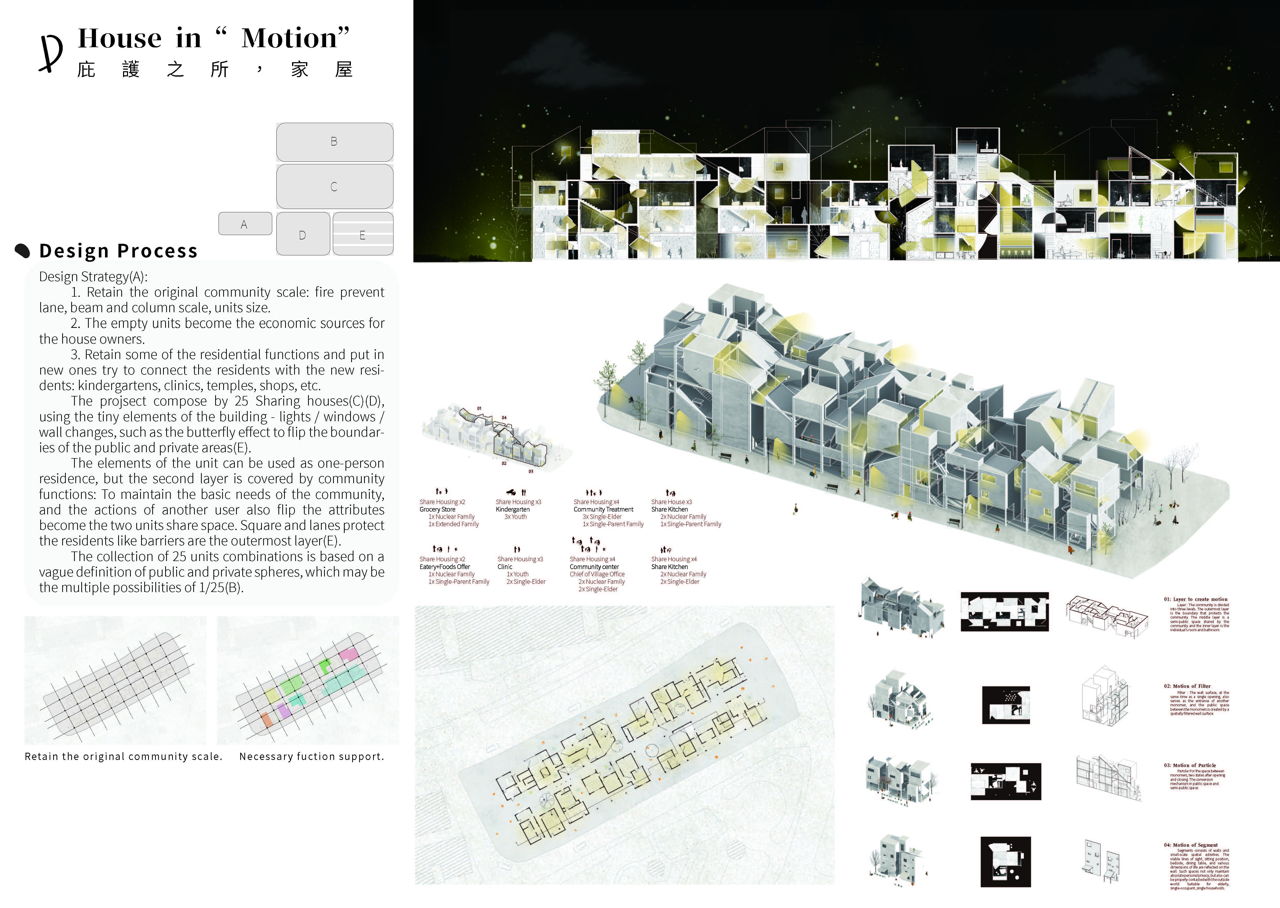 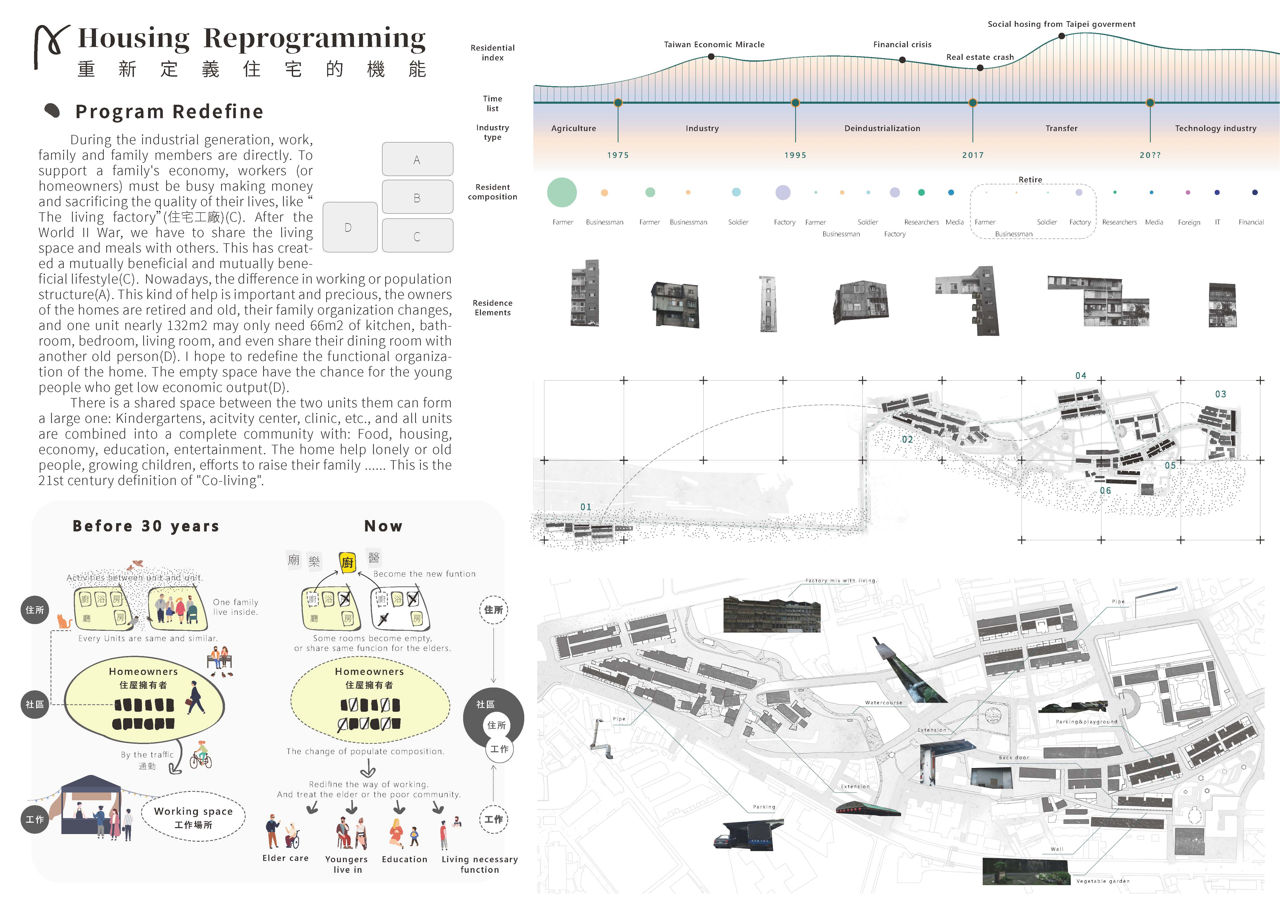 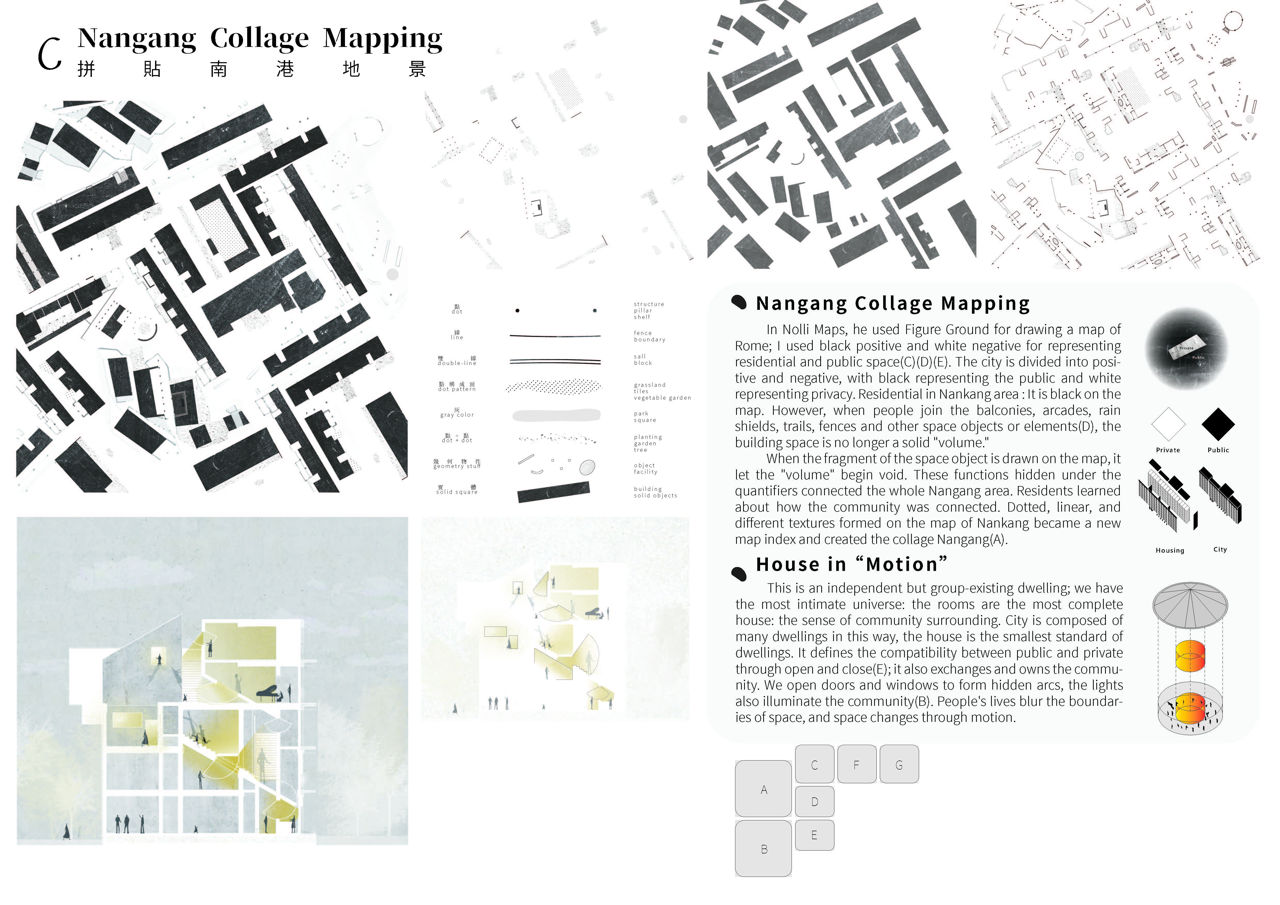 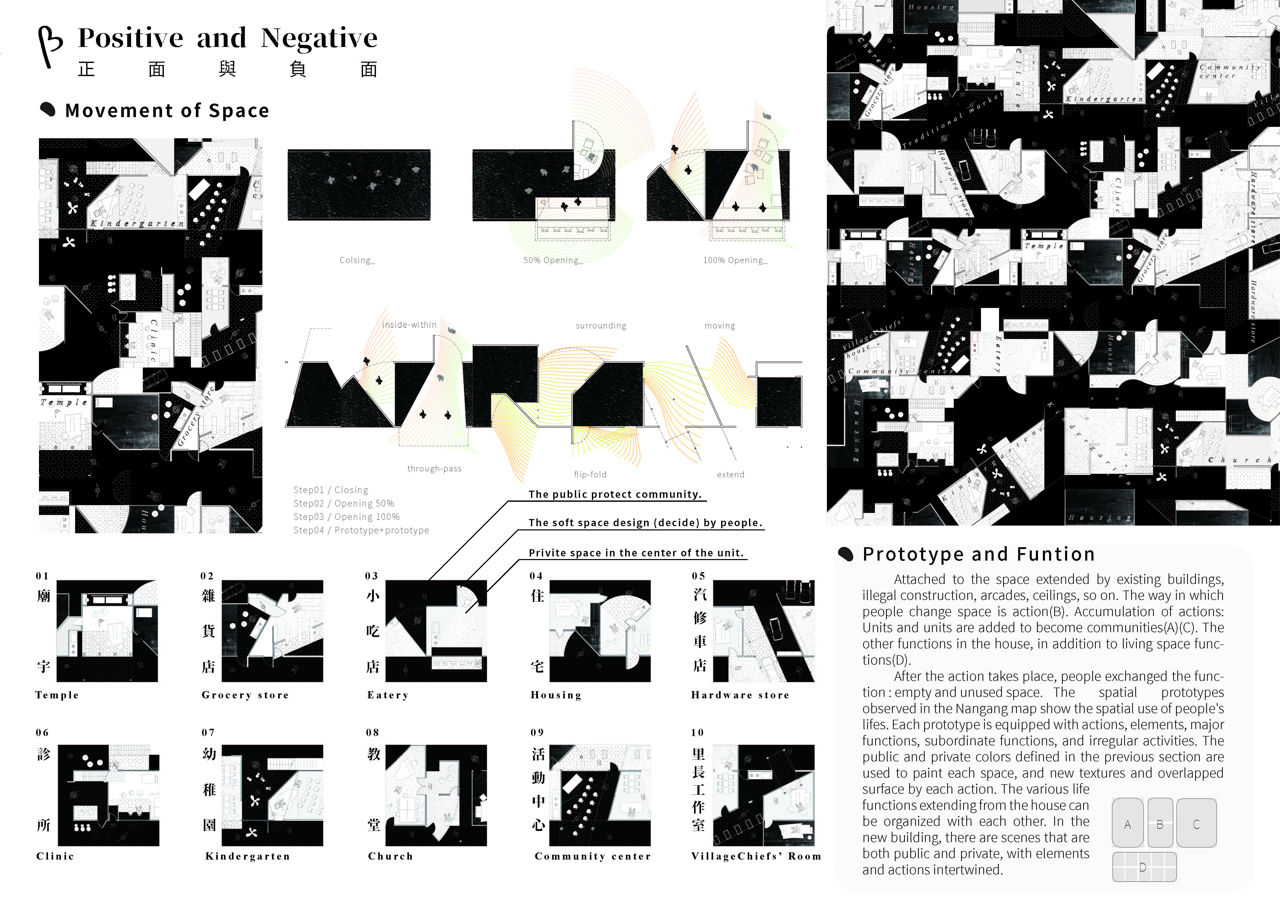